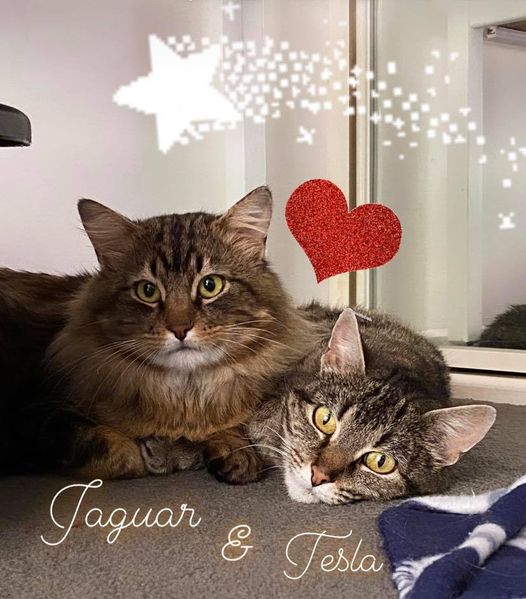 Tesla came into care heavily pregnant and just wanting refuge and food while Jag did everything he could to take care of his precious lady. He hasn’t left her side since coming into care, except to keep the kittens away from her and entertained while she gets some rest.

Tesla gave birth to five little bubs (the Luxury Cars litter) and took in Bubba an orphaned neonate like her own. She was a good mum but has clearly had so many in her lifetime she isn’t all that interested in boisterous kittens.

Jaguar has been the most involved parent of the two, he cleaned the bubs, cuddled them, tried to nurse them and kept them all happy, healthy and entertained while looking after their mum. Jag is a standout dad with the most caring nature, even taking in an additional three orphaned bubs (Race Car Drivers litter) into his care to teach them how to “cat”.

Now that the bubs have all grown up Jag and Tesla are looking for a quiet and loving home to call their own. They need an owner willing to work with them to build their trust as they show signs that they’ve been hurt by humans in the past. Jag will defend Tesla with his life if he feels she’s threatened, and wants nothing more than to be patted and spoken to by his foster carers. He is very intuitive and even speaks back with chirps once he trusts his humans. Tesla was very affectionate when she came into care but with so many kittens has become withdrawn and needs a home with Jag to blossom into.

They aren’t fond of young kids, and aren’t tested on dogs as they would defend their kittens, but love their human foster parents.